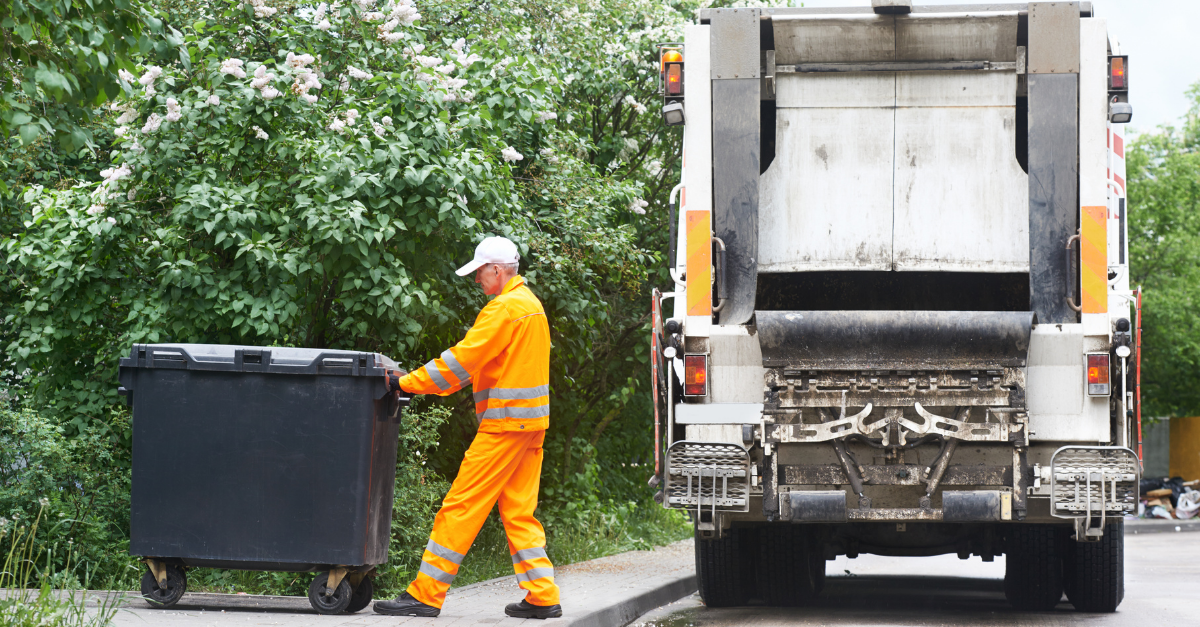 The Road to Digital Waste Insights: A Brief History of Waste Management

We have always generated waste. But with explosive population growth along with an incessant hunger for the latest consumer product, we are seeing an exponential increase in the amount of waste that we generate today. Modern day technology offers a wide range of solutions to address our growing garbage problem, including IoT solutions like smart waste sensors. But how did we get from throwing our garbage in the streets to remotely monitoring how we generate waste and using digital waste insights to build future-proof waste cycles?

This article takes a brief look at the history of waste management, from Ancient Rome and Victorian London to 19th century New York and the future of the industry.

Regarded as pioneers of advanced science and technology, the Romans are also seen as forerunners in the realm of sanitation. The Romans built sophisticated aqueducts, baths, sewage systems, toilets, and waste removal systems. In fact, the Roman Empire is recognized as the first civilization in Europe with an organized urban waste management labor force. As early as 4th century BC, the Romans employed cleaning crews to dispose of piles of waste with shovels and horse-drawn carriages. Crews would transport the waste outside of the city gates. And the authorities would hand out fines if waste was left in the street or not disposed of properly.

Since Roman society was heavily stratified. So, such sanitation services were considered a luxury and a sign of high social status. Households had to pay for cleaning crews to collect their waste as well as access to aqueducts and other wastewater systems.

After the Romans, centuries with no formally organized waste collection followed with few issues. There was plenty of land and low population levels, so dumping waste away from cities and people was commonplace and largely unproblematic. But by the 1700s, garbage was becoming a serious problem. With the industrial revolution and rapid growth of cities, public waste management systems slowly came into play.

The City of London: From Grimy Beginnings to Leading Resource Management

In medieval Scotland, residents would infamously forewarn passersby before chucking their waste (most notably, the contents of their chamber pots) into the street by shouting “gardyloo!” . But it was Victorian London, one of the largest cities in the world, that had a real reputation for filth.

Emerging in the wake of rapid industrialization and urbanization, the buildup of waste in London (and other large urban areas in Britain) led to deteriorating levels of sanitation and squalor conditions in the city. The capital was overwhelmed by the waste of an ever-growing population, the majority of whom lived in overcrowded slums. With no waste and cleaning regulations, the city streets were choked with refuse.

Organized solid waste management first emerged in London in the late 18th century when “dust-yards” were set up. A largely forgotten system, dust-yards are a very early example of municipal waste management. They effectively recycled everything collected and are hailed as the world’s first ever large-scale zero-waste system.

Dust-yards were not developed due to environmental or public health concerns. They arose because of the monetary value of household waste – coal ash from domestic fires (hence the name “dust”). Coal ash was in high demand. It was sought after in the brick industry for brick making and the agricultural industry for fertilizer. The high profitability encouraged dust-contractors to recover 100% of residual waste until the market value of coal ash collapsed in the mid-1850s.

Dust-yards can be seen as precursors to our modern-day waste management systems. They were an essential stepping-stone in the transition to public municipal waste services in London and the rest of the country.

The Birth of the Dustbin and Regulated Waste Management

Calls for the establishment of a municipal authority with waste removal powers could be heard as early as 1751. But was cholera that really advanced the development of municipal waste management services. Outbreaks of disease and the discovery of links between sanitary conditions and illness increased calls for waste reform.

Spearheaded by social reformer Edwin Chadwick, legislation was gradually passed for the provision of regulated waste management in London. This included a citywide authority that centralized sanitation regulation for the rapidly expanding city.

Early garbage trucks were simple open dump trucks pulled by horses. The British “dustbin” was also born with these legal changes, making it compulsory for every household to deposit their weekly waste in “moveable receptacles”.

By the end of the 19th century, waste powers had been consolidated and transferred to 90 London-based waste authorities. And in 1898, The Chartered Institution of Wastes Management (CIWM) was founded. Originally established as The Association of Cleansing Superintendents of Great Britain, today, the institution has developed into a leading professional membership organization for the sustainability, resources, and waste management sector. 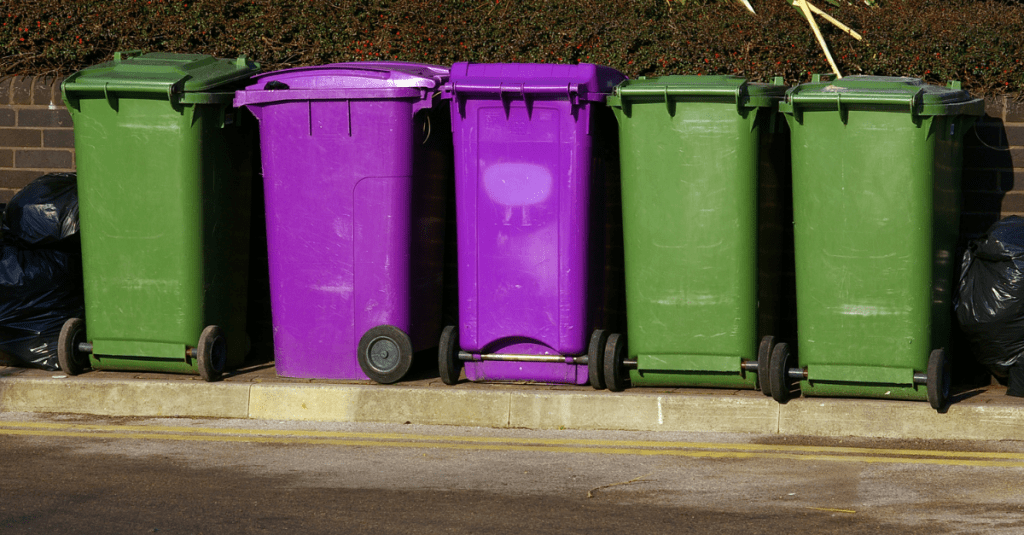 Across the Atlantic, New York City was another disgustingly dirty urban center. Citizens would be knee-deep in waste, as garbage was simply thrown into the streets. A public authority for street cleaning was first established in New York in 1881. But with corruption rife, New York lagged behind its urban counterparts across the globe. The city struggled to solve its waste problem.

It wasn’t until William Strong took over as mayor in 1894 that street cleaning took a turn for the better. Civil war veteran George Waring was successfully tasked with bringing hygiene to “the filthiest corners of the city”.

At first, sanitation crews were met with distrust and violence. Local, and often poor, communities did not understand the presence of government representatives in their neighborhood Sanitation workers were purposefully dressed in white, similar to clothing worn by medical professionals. They also wore helmets similar to police uniform. This was to symbolize the department as a beacon of hygiene and brand them as a public health authority.

Digital Waste Insights: The Next Chapter

In stark contrast to New York’s white-clad waste heroes, today’s waste management is largely invisible. Often taken for granted, it’s a privilege of modern life that we tend to ignore and only notice when it’s gone.

Traditional waste management is built on static and fixed collection schedules, with municipal waste services collecting our household and commercial waste. But as our ways of living, working, and consuming evolve, our waste generation patterns are becoming increasingly difficult to predict.

We need a new way of dealing with waste cycles and garbage collection. And it looks like data-driven waste solutions are going to be the next chapter in the waste management history books. 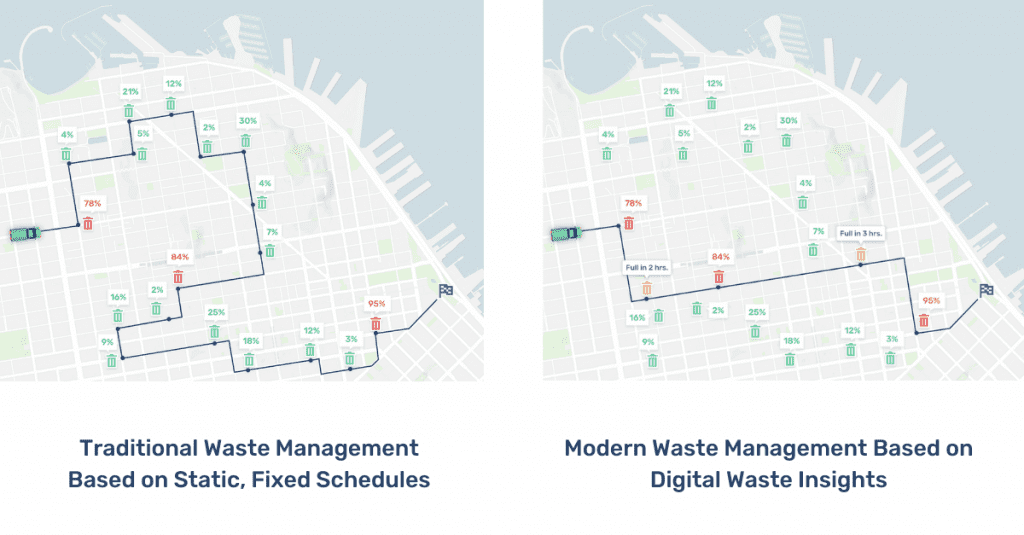 How Do Digital Waste Insights Work?

These sensors are connected to a digital platform that translates raw data into actionable insights. These can be used to improve the waste collection process. This empowers municipal waste service providers to remotely monitor the fill levels of bins, gather valuable insights on ever-changing waste patterns, and subsequently improve their pickup services. 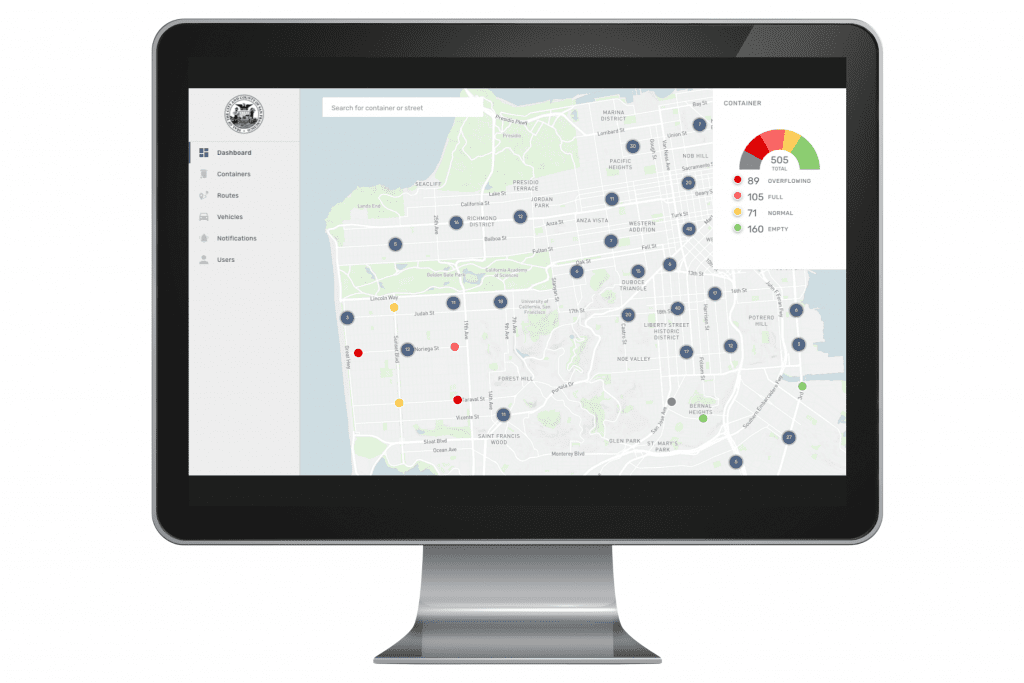 The Future of Waste Management

The waste management industry has come a long way throughout history. Modern methods and technology have completely transformed some of the world’s grimiest urban areas into clean and healthy hubs of life. And many new ideas today share similarities with the new ideas of the past. It seems that we can learn and recycle a lot of these lessons and apply them to the challenges of today and tomorrow.

We are currently on the cusp of another radical transformation in the way we deal with waste – the smart waste management revolution. More and more cities and municipalities are integrating digital waste technology into their operations. It seems it’s only a matter of time before the world’s waste collection is powered by data insights and providing us with greener and cleaner cities.